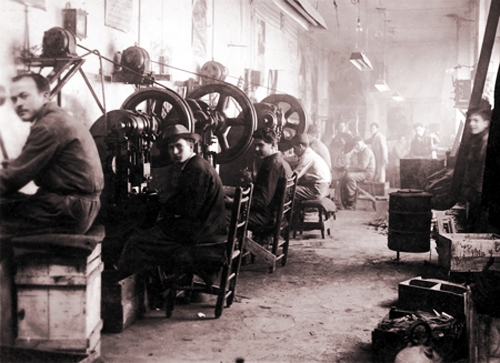 Although we can find earlier references to local knife making, it is between the end of the 17th century and beginning of the 18th century, when an increasing demand for short, sharp weapons, scissors and folding knives gave rise to this kind of handicraft in the city.

At the beginning of the 20th century, factories appeared, most of them small, where industrial production techniques were applied. Later, throughout the last century, modernization advanced and production increased and diversified through several complementary industries (handle making, riveting, accessories…)

Types of Folding Knives from Albacete:Classic of Albacete:

– Classic of Albacete
This is the classic folding knife of Albacete for domestic and rural use.

– Faithfull
These are simple and efficient knives. The oldest style.
– Ring Knives
These are stronger than the previous knives due to the spring and the ring which gives these knives the name.

– Sword point
These have blade similar to a sword or small sword.

– Cut point
Due to legal limitation imposed on the fabrication and use of folding knives at the end of the XIX Century,
these are used in agriculture for grafting for which they are also called “ grafting knives”.
–Stiletto
There are light, elegant with narrow, sharp blades.

– Cow’s tongue
These have short, wide, blades adequate for castrating, for which they are also called “capaora”.
– Sevilian
These are very similar to the Albacete, but with a more stylized blade.

– Machete
There are characterized by the symmetry of their blades and the straightness of their handles.

– Shepherd’s knives
Old and simple, there were used for tasks by shepherd.
– Tranchete
Ideal for trimming shrubs due to the curved form of their blades.
– Jerezana
These are typical folding knives for attack and defence. 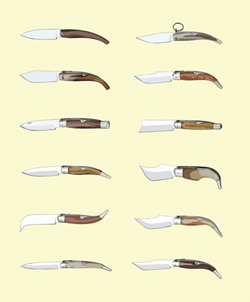